What makes a good leaving group?

A leaving group is a nucleophile acting in reverse; it accepts a lone pair as the bond between it and its neighbor (usually carbon for our purposes) is broken.

So what makes a good leaving group?

The “happier” and more stable that lone pair is, the better a leaving group it will be. The most predictive rule for leaving group ability is….

Think about the dissociation of an acid H–A to give H+  and A– . The species A– is the conjugate base of HA. It accepts a pair of electrons from the H-A bond. It’s a base acting in reverse.

The more stable A- is, the greater the equilibrium constant will be that favors dissociation to give A- .

This turns out to be the very definition of acidity! The negative log of the equilibrium constant is the familiar pKa.

In other words pKa is a direct measurement of how “happy” and stable a lone pair of electrons is – the very definition of what we should be looking for when trying to quantify leaving group ability.

So it should be no surprise to find that very weak bases such as  halide ions (I-, Br-, Cl-) water (OH2), and sulfonates such as p-toluenesulfonate (OTs) and methanesulfonate (OMs) are excellent leaving groups.

[One word of caution: pKa measures an equilibrium (think “differences in energy”), whereas leaving group ability is based on reaction rates. So although the correlation is very good, it isn’t perfect.]

On the other hand, strong bases are bad leaving groups. This is why alcohols don’t participate in SN2 reactions very much! the hydroxyl group (HO-) is a terrible leaving group.

If you’re not sure where a reaction is going to happen on a molecule, look for a good leaving group. That’s usually where the action is! 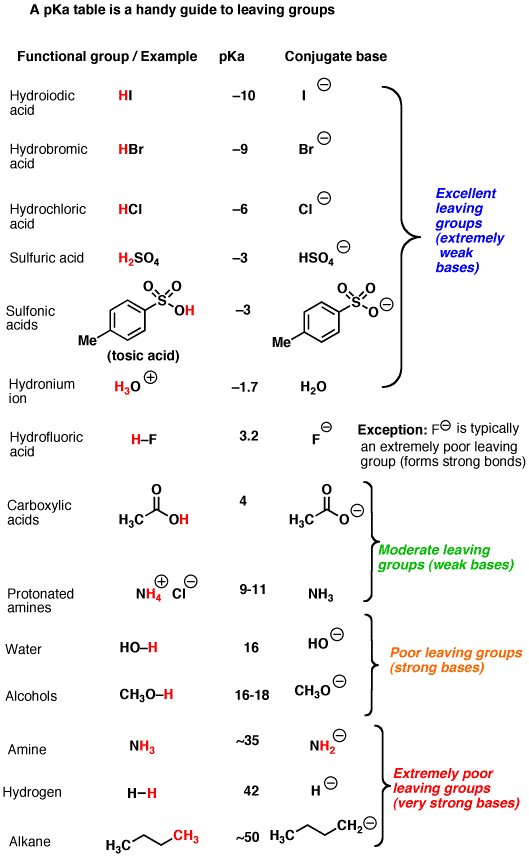 The trend is pretty clear – in general, the weaker the base, the better the leaving group. Furthermore, note how we (almost) never see alkanes or hydrogens as leaving groups. That’s because they’re strongly basic anions – and very unstable.

You might note that I have carefully avoided discussing fluorine. Fluorine tends to be a very poor leaving group for SN1/SN2/E1/E2 reactions. In Org 2, you may see some examples where F can act as a leaving group when it is attached to a carbonyl carbon or an aromatic ring. These reactions (addition-elimination reactions) are a little bit different in that the rate determining step is not so related to loss of the leaving group. There are some extra factors at work in these situations that we can discuss if you’re curious.

Next Post: Leaving Groups Are Nucleophiles Acting In Reverse

59 thoughts on “What makes a good leaving group?”

Leave a Reply to kb